Brown Marmorated Stink Bug (BMSB), Halyomorpha halys, is an exotic pest native to Asia. It was first introduced to the United States in 1996 in Pennsylvania. It has since been reported in 40 states including all states east of the Mississippi River, Oregon, California, Minnesota, Texas, New Mexico, Arizona, Nebraska, and Iowa. It has been intercepted in North Dakota, but so far has not been reported to cause damage or as a nuisance pest. This pest easily hitch-hikes around so spread is inevitable. BMSB is very mobile and can quickly switch hosts. They will move from early-ripening crops to later maturing ones. Almost any plant could be at risk.

BMSB has a wide host range in North America. Of particular interest to our region are apple, crabapple, cherry, currant, maple, linden, serviceberry, honeysuckle and rose. It can affect garden crops including peppers, tomatoes, blueberries, raspberries, grapes and probably many more. It is also a pest of agronomic crops such as soybean and corn. BMSB can also be a indoor pest in the late fall, much like the boxelder bug. They congregate in large numbers in homes looking for a warm place to overwinter.

Description – BMSB like other stink bugs are a “true bug” and therefore have the typical shield-shape. They are approximately 5/8th inch long and 3/8th inch wide. The top-side of their body is mottled shades of brown and grey. The underside of the body is white or light grey. They also have dark blue or copper puncture marks on their heads and dark red eyes. The BMSB can be distinguished from other stink bugs by the alternating light and dark bands on their antennae.

Damage – Stink bugs feed by sucking plant juices with their straw-like mouthparts. On leaves, this feeding will appear as light colored stippling that can turn necrotic over time. On fruit, the feeding causes a distortion that is referred to as “cat-facing” and makes the fruit unusable as a fresh product. In bean the damage usually occurs on the immature beans and pods.

Report any suspect insects to:

The North Dakota Department of Agriculture

EAB has NOT been detected in North Dakota.
Unfortunately, it is believed that EAB may reach the state in the coming years.

EAB adult females lay their eggs on the bark of the tree.  Eggs are very small (less than 1mm) and rarely observed.  Once hatched, the larvae tunnel their way into the tree where they feed beneath the bark creating serpentine galleries.  Larvae are up to 1.25 inches long, creamy white and have several bell shaped segments.  In the spring the EAB will pupate beneath the bark and emerge as an adult.  The adult EAB will chew its way out of the tree creating D-shaped exit holes that are approximately 3-4mm in diameter. Adult EAB are 0.3-0.53 inches long with metallic green elytra (wing coverings).

While feeding beneath the bark of the tree the larvae disrupt the flow of nutrients throughout the tree.  Once infested an ash tree can die in as little as 2 years.  There are insecticide treatments available however they are costly, treat individual trees and most need to be repeated every year.  Insecticide treatment is not recommended until EAB infestations are within 15 miles of your location (NDDA, NDFS, NDSU Extension position statement on insecticide use).  The closest EAB has been found to North Dakota is Winnipeg, Manitoba, Canada, just 50 miles north of our border. In the U.S., the closest infestation is Duluth, MN as well as the greater Minneapolis/St. Paul metro area. Two counties in Nebraska have also been placed under quarantine in 2016.

USDA APHIS PPQ contracts the placement of EAB traps all across the state each year to monitor for this pest.

What you can do to prevent the introduction and spread of EAB:

The gypsy moth (Lymantria dispar) was brought to the U.S. in 1869 to experiment with silk production. Populations soon established and the pest has been expanding in distribution since. Adult females are not able to fly. Gypsy moth larvae spin a thread of silk and disperse in the wind. It is estimated that this natural spread would be about 2 miles per year. The actual rate of spread has been much greater due to human aid, primarily by movement of nursery stock and automobiles.

No gypsy moths were captured in traps in North Dakota in 2005-2013.  In the past several years, infestations have been found in the Twin Cities area of Minnesota, more recently large numbers of moths have been caught in the arrowhead region. Steps are being taken to slow gypsy moth spread.  Trees, Christmas trees, shrubs and logs from quarantined areas must be certified before movement.  State and federal agencies use pheromone traps to detect outlying populations.  Eradication measures are taken if outlying sites are determined to have established gypsy moth populations.  Since 1993, officials have implemented a “Slow the Spread” program that uses intensive sampling and precise population control techniques.  The program is concentrated on a 100 mile wide band bordering the generally infested area.  The rate of spread has been about half as fast since implementation of the program.  This program has been implemented in the arrowhead region of Minnesota since 2003.

Gypsy moths feed on a wide range of trees and shrubs and could be transported on any nursery stock or Christmas trees brought into the state from quarantined areas.  Closely inspect and monitor stock received from these areas and ensure shipments are accompanied by a federal certificate or stamp demonstrating compliance. 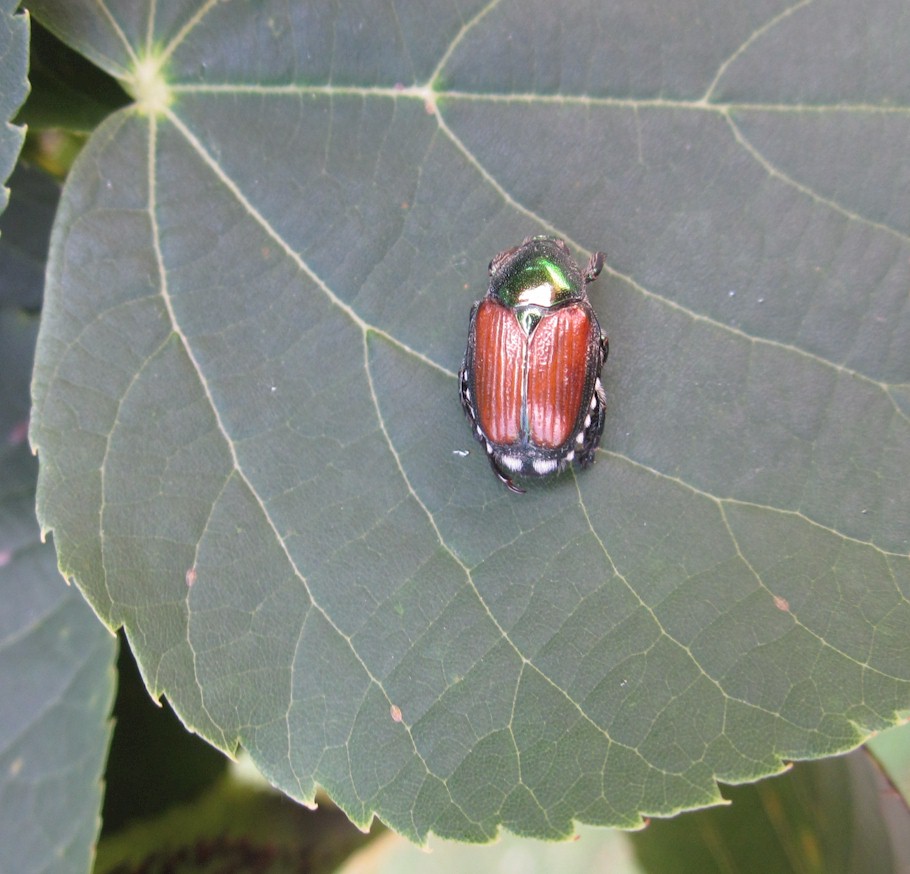 Japanese beetle (Popillia japonica) was first discovered in the United States in New Jersey in 1916. A native of Japan, the beetle occurs in all states east of the Mississippi River. Japanese beetles attack a broad range of host material including nearly 300 species of plants. The adult beetle will feed on field crops, ornamentals, trees, shrubs and garden plants, severely defoliating and skeletonizing the host plants. The larvae will feed on the roots of turf grasses and field crops (especially corn and soybeans) as well as organic matter in the soil, severely damaging golf courses, lawns and pastures. The Japanese beetle is a highly destructive plant pest that can be very difficult and expensive to control.

Japanese beetle adults are about ½ inch long with the male slightly smaller than the female. The insects are metallic green in color with bronze wing covers called elytra. Adults begin to emerge mid-June with peak emergence occurring approximately 3 to 4 weeks after initial emergence. The female beetle will burrow into the soil during the day to lay eggs, laying up to 60 eggs in her 2 month lifespan. Eggs will hatch in about two weeks. Larvae, which are about 1 inch long and cream colored with a brown head, will live in the soil, feeding on plant roots. The insect will overwinter as third instar larvae below the frost line and will pupate and emerge the following spring.

Currently the Pine Shoot Beetle is not found in North Dakota.

Spotted wing drosophila, a major fruit pest introduced from southeast Asia, has been discovered in North Dakota for the first time in 2013. Adult specimens were submitted to the NDSU Plant Diagnostic Lab from Carrington in Foster County and positively identified as SWD.

SWD was first detected in the continental U.S. in California in 2008 and has since spread to other fruit-producing regions of the country. SWD pierces seemingly healthy fruit, and lays its eggs. The eggs hatch in about 3 days and the larvae feed on the fruit. Early detection by gardeners and growers is critical because symptoms often do not appear until after the fruit is harvested and in the hands of the consumer. Commonly confused with the common fruit fly, Drosophila melanogaster, SWD differs as it attacks unripe to ripe fruit, whereas the common fruit fly feeds on overripe and rotting fruit. SWD most commonly affects raspberries, blackberries, strawberries, blueberries, honeyberries, grapes, hardy kiwi, cherries, plums, and peaches.

Treatments are available for SWD if detected early. Different chemical classes must be rotated, as the insect is capable of many generations in one growing season and may develop resistance.

It is impossible to identify SWD without adult specimens. If you believe you have found SWD, samples should be submitted to the North Dakota State University (NDSU) Plant Diagnostic Lab, http://www.ag.ndsu.edu/pdl/.

For more information and photos or how to create your own trap, visit these links.